Talking to Zoe Hillenmeyer, winner of this year’s Edie Hunt Award (named for Forté’s Board Chair Emeritus), it’s easy to see why she was able to successfully reinvigorate and rebrand what is now called the Olin Women in Business (OWIB) organization during her tenure as an MBA student. 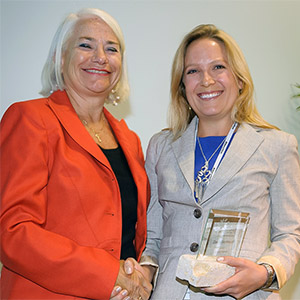 Zoe’s enthusiasm and her depth of perception about issues affecting women in business exemplify everything the award stands for. In two short years, Zoe managed to reorient OWIB, spearhead several events for students and alumnae, initiate gender and diversity workshops and a notable speaker series, and provide resume and career coaching for women at Olin.

“Olin is a small program, and you can have a lot of impact at the individual level,” she notes. “I did a lot of individual coaching on understanding gender differences in skill set assessments – that was a big part of making change happen.” Zoe and the OWIB group also worked with the Olin admissions team, partnering up on outreach activities, and thinking strategically about the language used to promote the MBA. “It’s not about business administration—it’s about leadership, taking on responsibility, understanding finance so you can lead people. Women would often ask, “How would you finance this? What’s the risk? What’s the reward?” As women, we tend to put ourselves in the bottom 25% of the earning range. Women tend to perform at the same level or better than their male peers, and yet we undervalue ourselves. Helping women understand that dynamic and how to negotiate is so important.”

Zoe is frank about how gender dynamics affected her own beginnings as an MBA student, and what she did about it. “My class was about 23% female. That surprised me,” she recalls. “In a group meeting, I was often the only female, and I would make suggestions, and they wouldn’t be going up on the board. And I didn’t know why I was getting lower expertise ratings amongst my peers despite being a higher performer in the class. At first, I’ll be honest, I got angry. Sometimes when we’re faced with reality, that’s the easiest thing to do. But I’m also insatiably curious, so I started doing research, and I read the incredible work being done out of Harvard, and by companies such as Deloitte, and organizations like the Catalyst Foundation. That research helped me form a clear understanding of what was happening in my program. There was a problem, there was information about the nature of the problem, and there were actions we could take to help start to fix the problem. And given those circumstances, it was impossible for me not to do something.”

Zoe notes that she was lucky to have a lot of support from various people at Olin, including the dean, who agreed to give her unlimited resources in exchange for her dedication. “If I had been speaking into a vacuum, nothing would have changed,” she says. In fact, by tackling the problem head-on, Olin has been able to raise the proportion of women entering the program to 33% in the past year, a notable accomplishment.

Today, Zoe is headed for a new job in consulting with IBM global business services. “I interned with them last year, and had a great experience. The culture includes an eagerness for diversity of thought, and openness to people who want to change the status quo. It seems like a good fit!”

Zoe calls Forte “a top-notch organization in terms of role-modeling,” and credits the Forté MBA Women’s Leadership Conference as a unique opportunity to meet face-to-face with inspiring women in leadership positions. “As women enter their MBA program, they need to know that it’s okay to be a little bit nervous, and it’s okay to take risks and to be honest with each other. That’s what I love about this conference: it makes it okay to be vulnerable. I’m able to bring in students from my program and give them that space to ask questions they think are stupid, and hear from each other, so that they can begin to see themselves as everything they actually are inside already. That’s the best part!”

Congratulations and best wishes to Zoe in her new endeavors!