The 2021 Forté MBA Women’s Leadership Conference reached more women than ever before. This year’s event was held virtually, which allowed incoming MBA women from all over the world to participate. We reached out to three Forté Fellows to hear about their experiences at the conference.

Mariam Bobtoya is pursuing an MBA to sharpen her finance skill set, become a well-rounded professional, and advance in her career. She logged in to the conference platform from Ghana. She told Forté, “I came in with an open mindset, willing to learn from all these seasoned professionals that were in my shoes just a few years ago.”

I was able to connect to other people that had similar backgrounds as me or were in an industry that I was curious about.

Elissa Sangster, Forté CEO, kicked off the event with an introductory slideshow in which she reminded attendees that even if they’re the only woman on their team, they aren’t alone — they have each other and the whole Forté community. That resonated with Mariam, who is the only woman on her company’s management team. She said, “It does feel lonely sometimes knowing you are the only person that is representing women, and that you have a high standard to set because you’re trying to pave the way for others.”

At the conference, Mariam met other women who understand what it’s like to be the “only.” She said, “I was able to connect to other people that had similar backgrounds as me or were in an industry that I was curious about.” On Saturday, she enjoyed hearing from the Edie Hunt Inspiration Award winners. She noted, “When the winners were introduced, it was one of the moments that I found very uplifting. These are women who are doing tremendous things in their lives and just coming out of their MBA program.”

Reflecting on the two-day event, Mariam said, “It was great that we could all embark on this journey together and see where it takes us.” 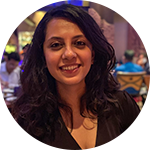 Meenakshi Kukreja sees the MBA as a way to develop her skills in brand management and product management — and shatter the glass ceiling. She joined the conference from India, where it started at 7 PM, and her enthusiasm powered her through the night. She said, “Getting to know people from various schools, their points of view, their backgrounds, their aspirations, and their dreams was an exciting and lucrative learning opportunity.”

At the Career Insights: Marketing panel, Meenakshi connected with others in her industry, adding them on LinkedIn. She said, “These are the people who genuinely can help me — or I can help them.” Since the conference, she has stayed in touch with a group of Canadian MBA women using Discord and WhatsApp. She said, “The goal is that every woman has each other’s back, and we want to rise by lifting others.” She’s also a member of the Forté Access Network, a private network where MBA women at Forté partner schools share resources and support each other.

It was empowering, it was motivating, and every session had such great takeaways.

During the Dialogue with Leadership event, Meenakshi found it reassuring to hear the executives talk about coping with imposter syndrome, making mistakes, and the importance of giving yourself grace. She said, “They were telling the struggles that they’ve gone through, and the fact that everyone is a human at the end of the day.”

Summing up her experience at the conference, Meenakshi said, “It was empowering, it was motivating, and every session had such great takeaways.” 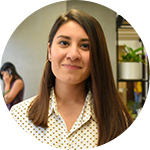 Divya Dewan also participated from India, where she has worked in the male-dominated pharmaceutical and tech industries. She became interested in diversity and inclusion, and started writing about male allyship on LinkedIn. She said, “I read a lot of stories about how men are doing it wrong, but I wasn’t reading enough stories about what they’re doing right.” Inspired by her D&I work, she is pivoting into the people space. To help her with that transition, she earned her certification as a professional coach, and applied to b-school.

There was an unconditional positive regard around the room. It felt like we’re all in it together.

The MBA Women’s Leadership Conference opened her eyes to Leadership Development Programs (LDPs), which aren’t as well known in India. She said, “I didn’t even know this pathway could exist.” As a potential startup founder and entrepreneur, she now sees LDPs as an intriguing option.

On Friday, the conference ran until 5 AM in India, and Divya stayed up through the final event, the Career Expo. She said, “I was in my final company chat at 4:59. I completely leveraged it!”

Recalling the Career Expo’s supportive, non-judgmental atmosphere, she said, “There was an unconditional positive regard around the room. It felt like we’re all in it together.”

A few days after the Forté conference, Divya attended a tech event where there were 75 men and two women. She remembered Ciera Crawford, Group Regional Operations Director at DaVita, telling conference attendees, “Keep reminding yourself that you absolutely deserve your seat at the table.” As Ciera’s words echoed in her head, Divya felt a responsibility to create space for the women who will follow in her footsteps. She said, “A mindset shift happened for me, and the way I showed up in that room was different.”