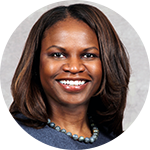 Debra Coleman briefly tried working in a school… and in a corporate law office… and in a law firm that collected delinquent taxes. “I had no idea what I wanted to do!” she recalls. Graduating from Williams College with a liberal arts degree, she landed a job as a financial analyst, and thus began a long and successful career in banking.

Although she eventually earned her MBA at Columbia Business School when she entered banking, she had never even taken an accounting course. “The person who hired me was a Williams graduate who believed in the value of liberal arts education,” she says. “They knew that in six months, I could learn what I needed to know.”

Debra finds that women, particularly those just starting out, tend to deny themselves permission to be “a new beginner” as she puts it. If there are ten key requirements for a job, “men tend to say they can do eight of them, while women say they can do two or three; in reality, both of you can do about five, but in a year of learning, you can do it all, and that’s what matters.”

She also cautions against being a people-pleaser: “Sometimes, women are very focused on making sure everyone likes them. If you have a handful of people who champion you, you can win. There are more people who want to see you be successful than people who don’t. But you don’t need to please everyone all of the time.”

That kind of straightforward advice is characteristic of Debra’s personal style, which puts a premium on authenticity. “Be yourself in how you dress, how you engage other people, how you present yourself.” She recalls mentoring one young woman who felt that, in order to work in financial services, she had to dress well beyond her years, wearing clothes suited to a much older woman.

“You don’t have to do that,” she says. “It’s hard to get up every morning and work hard and make sacrifices when you’re disconnected from yourself. People appreciate people who are authentic and generally positive. Sometimes we are so hard on ourselves, we focus only on what we want to improve, instead of focusing on who we are and what we do well.”

Today, Debra is a Managing Director of Investment Banking at Bank of America Merrill Lynch. She is a member of the Financial Institutions Group, and provides advisory services to banks and specialty finance companies. She joined Merrill Lynch in 2003 after five years providing capital raisings and merger advisory services for Sandler O’Neill & Partners.

“What I like about what I do is that we get to think through complex issues with very smart clients who are asking us for advice. If they are thinking about raising stock, or selling a subsidiary, or buying a business, they’ll come to us and say, what do you think? Banking marries strategy with finance.”

She also values the role that her sector plays in the national and global economies. “The clients I cover are called specialty-financed: lenders who are not financed by deposits, as banks are. They make loans to middle market clients, or to consumers to fund things like leasing office equipment, or buying furniture for a new home. Those are tangible products that move the global economy.”

Debra is pleased that today, unlike the era when she started out, the associate class coming into the firm often consists of 30-50% women. “There’s a lot more diversity in banking than there used to be. It’s an easier environment than it was when I started.”

She also appreciates that the firm provides ways to give back to the community. “One year I was honorary principal at a school. I had a chance to help the school around some budgeting issues. Another woman at the firm advises a small businessperson in Latin America, providing budgeting and planning services through a program the firm runs.” She adds, “A lot of banks understand community and connectedness.”

If Debra sounds sure-footed, perhaps that’s because she makes it a point to make conscious decisions about the course of her life. Every three years, usually around the end of summer and again right before the calendar year begins, she takes time to ask herself what she wants to be doing with her life.

“Taking a deliberate approach removes a lot of frustration from your life,” she notes. “I find when I talk to people who are unhappy about their circumstances, sometimes it’s because they made unconscious decisions. It’s about your personal life and your career: what do you want your life to look like? And what help might you need to ask for in order to get there? Even if the actual course takes you in a different direction, you’ll be on the path to something satisfying.“