Carolyn Miles, (Darden MBA, 1988), majored in animal behavior at Bucknell, but she passed out cold the first time she joined a veterinary team during a surgical procedure, and realized that her career ambitions had been misplaced. Out of college, she joined a multinational chemical company, working in sales, overseeing a large territory in the Midwest.

She went to Darden to get her MBA and fell in love with marketing. She also fell in love with and married her husband during her time in graduate school. When they moved to New York the following summer, she joined American Express, marketing credit cards to college students.

When they were offered the opportunity to go abroad, she and her husband jumped at it, and they were able to leverage an American Express program that allowed them to relocate to Hong Kong. Though the move was intended to be temporary, they loved it and stayed for years, and two of their three children were born there.

An experience during a trip through Southeast Asia foreshadowed a change of career. “I was sitting in the backseat of the car with my very young sons, during a trip to the Philippines,” she recalls. “Slums lined the highway. A woman came to the window with a baby in her arms, the same age as my younger son. At that moment, I realized what a different world this is for so many of the world’s children. I started doing some work in Hong Kong with organizations helping the poor, as I felt there must be something I could do to give back.”

By the time she returned to the States, she knew she wanted to transition to nonprofit work. The family settled in Connecticut, and eventually, Carolyn found a job listing for a mid-level marketing position at Save the Children covering many of the responsibilities she’d had at American Express. That was sixteen years ago. She moved up quickly, serving as COO for seven years, before taking the helm as President and CEO three years ago.

Is her MBA experience applicable in a nonprofit environment? Carolyn thinks so. “We work in 120 countries; we have 24,000 people who work for Save the Children around the world; we’re a 2 billion dollar operation globally. In those ways all the things you need for a global business you need for an organization like Save the Children.” 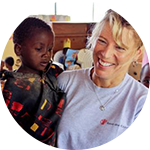 At the same time, she sees some unique challenges in nonprofit work. “Burnout is one of the toughest things,” she notes. “We have huge programs in Syria and the five countries surrounding. We’re responding to the US border crisis. We’ve got programs in Sudan and the Central African Republic. There’s an emergency all the time. Getting people to pace themselves is difficult. We have a huge problem with people taking time away. You have to force people to take their vacation.”

For a young woman just starting out in her career and interested in nonprofit work, Carolyn advises some careful thinking about the pros and cons. “The economic rewards are going to be quite different. You have to decide if you’re okay with that. Some of us come out of business school with a lot of debt, like me!”

Carolyn plans to continue her stewardship of Save the Children and her passionate advocacy for kids in need worldwide. As she advances the organization, she says she enjoys mentoring people, and being mentored herself. She notes that even the chief executive needs coaching sometimes, and credits her current board chair, Anne Mulcahy, a former CEO at Xerox, with providing her with ongoing input and advice.