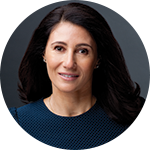 Forté’s “MBAs on the Move” campaign is our newest effort to showcase the interesting and rewarding careers of women with MBAs. The first of nine monthly stories is coming to your inbox next week. Find out who you’ll meet and what makes them unique.

The campaign will introduce you to nine women rising in a range of industries less than 15 years after earning their MBA. Forté’s website is already packed with inspirational stories about college women, MBA students, and top executives. These stories will create a new category of content featuring women with fascinating careers who achieved success quickly after earning their MBA—and are still climbing. We selected these women because they are clear leaders—movers and shakers in many arenas—and we believe spotlighting their stories will have a powerful, positive impact.

While bringing you diverse stories is a priority, these women also have common qualities: connections to Forté and a commitment to lifting up other women as they climb. All MBAs on the Move are Forté members who attended Forté sponsor schools, some work at Forté sponsor companies, and many volunteer for us.

Our MBAs on the Move also share geographic ties to the greater New York City area. Given these women are real, accessible role models, we didn’t want to stop at telling you their stories—we wanted to show you their remarkable personalities and presence. Forté invested in a special, Brooklyn-based photo and video shoot to achieve this, and we’ll publish our favorite shots with each profile.

As one woman we’ll feature says best in her video interview: “I think a big part of where we go as people has to do with what we’re able to see, what we think is attainable for us. Forté exposes you to the possibilities.”

Introducing Our “MBAs on the Move”

This April through December, we’ll send you one MBAs on the Move story each month via a dedicated email. We’ll provide the women’s career perspectives via short question and answer articles, or a video. Here’s a preview of the amazing women we’ll feature:

More than 15 years ago, Catalyst and the University of Michigan researched why women still aren’t adequately represented in MBA programs, despite the admirable businesswomen surrounding us. The barriers they discovered that keep women from pursuing MBA degrees called us to launch the Forté Foundation, and reinforce why we believe our new campaign is so important:

Forté’s MBAs on the Move campaign will bring you more female role models in our network who have broken down these barriers—and who will accelerate the incredible progress we’re making together in closing gender gaps in business school and leadership.

We want to hear from you! What industry, function, experience level, and/or location would you feature in a future “MBAs on the Move” campaign? Email your feedback to future@fortefoundation.org.