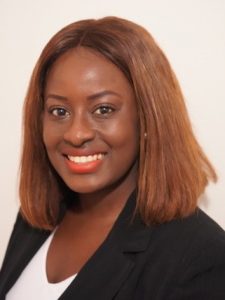 Alberta Asafo-Asamoah and Aoife Considine are both soon-to-be MBA graduates of Imperial College Business School in London. They both serve as leaders of Imperial MBA Women and are fierce advocates for underrepresented populations. At the recent MBA Women’s Leadership Conference, Forté named them both winners of the 2021 Edie Hunt Inspiration Award, which recognizes the achievements of women MBAs at Forté partner schools.

Alberta Asafo-Asamoah understands the importance of having a global perspective. Growing up in Ghana, her parents moved their family to London to explore a new culture and educational opportunities. At age 18, she moved to the U.S. to attend Syracuse University as an undergraduate studying economics and political science.

After college, she worked at NatWest in corporate and investment banking, a field she gained interest in during an Economics elective at Syracuse. After five years in banking, she decided to transition into social impact investing and entrepreneurship by starting a math tutoring and consultancy service in London.

Her courage to take risks and lead with her heart is one of the reasons Alberta was selected as an Edie Hunt Inspiration Award winner this year.

Even with her work experience, Alberta knew she had gaps to fill in her knowledge base to successfully transition into impact investing so she chose to enroll in an MBA at Imperial College Business School, where she jumped into her role as one of four leaders of Imperial MBA Women. One of her proudest accomplishments was launching a newsletter specifically for women business students at Imperial, a role in which she interviewed students of Imperial’s Executive and Weekend MBA programs and expanded her network.

One of her favorite memories was co-hosting an event to celebrate the lifetime achievement award presented by Imperial to Yvette Stevens, the first female engineer in Sierra Leone who also represented her country at the United Nations. Honoring Yvette’s engineering and diplomacy achievements in front of over 100 of her MBA colleagues, the Dean, and the wider Imperial network was a highlight of Alberta’s time at Imperial.

As if being vice president of Imperial MBA Women did not keep her busy enough, Alberta also served as Employer Relations Director for the Africa Business Club within the Imperial College Business School. In this capacity, Alberta connected business school talent to African business opportunities and promoted Black, Asian and Minority Ethnic (BAME) talent within Imperial College and beyond.

Alberta’s desire to create opportunities for underserved populations and communities surfaced after five years in traditional banking.  “I felt something was missing. I saw friends who were doing interesting projects in Ghana and thought, ‘Why don’t I combine the knowledge I’ve gained in banking with something I am passionate about that has a social impact?’”

She started teaching math after work to prepare young people for their exams. Her sister recognized her teaching skills and encouraged her to start a business, so she launched AlgebraIntheCity – which she still manages even as a full-time student. While running her business, Alberta also ventured into impact investing, working with the Transformational Business Network (TBN) as an Impact Investment Analyst to identify and evaluate potential investments in Uganda and Kenya to help bridge the funding gap for businesses that have difficulty accessing capital.

Alberta will continue her commitment to social impact post-MBA. Her plans are to join an investment firm as a senior investment analyst whose mission is to improve people’s lives in emerging markets through innovation and entrepreneurship. In that role, she will focus on sourcing and analyzing investment opportunities for female-led businesses in Africa.

She also plans to launch a fashion e-commerce platform for the African market. “Currently a lot of African women shop on U.S. and European websites, and the clothes aren’t tailored for them,” she explains, whether because of lack of variety, high cost, or other reasons.

Wherever Alberta’s path takes her in the future, it seems certain that she will continue making a difference in the lives of women and on her home continent. 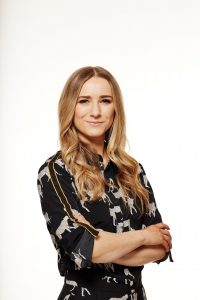 When Aoife Considine was an undergrad at Trinity College in Dublin, she became frustrated while snowboarding because she couldn’t keep up with her downhill skiing friends. So, alongside a fellow classmate, she invented a new binding system for her snowboard, entered the design into a competition, and won an award sponsored by Sir James Dyson, the renowned inventor.

It’s this same drive and innovative spirit which led to her selection this year as a winner of Forté’s prestigious Edie Hunt Inspiration Award.

Creating a more inclusive culture by not making assumptions

Aoife, like Alberta, will graduate from Imperial College Business School in London this fall. She was recommended for the award by her peers and professors for her success in creating a more inclusive culture at Imperial. She has held two major leadership roles there: the equivalent of student body president and one of four leaders of Imperial MBA Women.

Early on, Aoife noticed that Imperial’s recruitment campaigns did not represent the school’s diverse student body; the class profiles did not include a single east- or southeast-Asian student, even though the majority of students at the school come from these regions. Before talking to school administrators with her concerns, Aoife talked to Asian colleagues at Imperial to hear their thoughts about it.

“I didn’t want to assume the response that I thought was reasonable was the same as that of the actual people being affected,” she explains. After talking to the school’s administration, who responded swiftly, they were “better able to remedy the situation.”

Aoife believes it is her ability to represent the needs and wants of her fellow MBA students in a respectful way that garnered recognition and, ultimately, led to her selection for the Edie Hunt Award. “I am an advocate for those around me, and I don’t assume my way is the right way,” she says.

While studying mechanical engineering as both an undergraduate and graduate student, and later, during six years of working in engineering and design for the UK rail industry, Aoife got a strong dose of how it felt to be in a minority.

In the UK rail industry, women only represent 12% of the total workforce and 2% of senior managers; through this work experience and as one of the few women in her engineering classes, she developed an appreciation for having a network of supportive female allies.

Aoife plans to take this inclusive perspective into her post-MBA workplaces, which will begin with a new role at Amazon Pathways, a multi-year leadership development program. She first heard about Pathways when she attended Forté’s MBA Women’s Leadership Conference while she was a Forté Fellow.

We look forward to Alberta’s and Aoife’s continued involvement with Forté and to following the success of their careers in the future.