Certain things catch your eye, but pursue only those that capture your heart. – Native American Proverb

Everyone has influences that shape their lives. People (parents, grandparents, and teachers), religious traditions, and cultural experiences, for example, can all contribute to personal and career growth. For members of one of the 573 federally recognized Indian Nations throughout the United States, influences have been passed down through multiple generations, over hundreds – and sometimes thousands – of years.

In honor of Native American Heritage Month, recognized every November by the federal government to ensure “their rich histories and contributions continue to thrive with each passing generation,” Forté interviewed four Native American women who stay connected to their distinctive heritage and personal passions while carving unique paths in business. 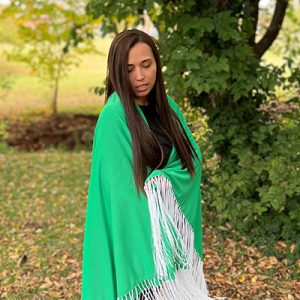 Whitney DeAngelis has many sides to her – a mother of three, an EMBA candidate at Duke University’s Fuqua School, a project planning manager at an energy mining company – but her membership in the Choctaw Nation of Oklahoma is her foundation. A lifelong resident of Oklahoma City, Whitney says the Choctaw Nation has always supported her educational and career goals.

“The Choctaw Nation’s mission is to encourage growth and prosperity” for its members, she says, and their career center offered Whitney resume assistance, helped her apply to colleges, and provided career coaches. “They push you to be better,” she explains, “and they are there to walk you through those scary steps that people are often afraid of.”

The Choctaw Nation’s mission is to encourage growth and prosperity. They push you to be better and they are there to walk you through those scary steps that people are often afraid of.

Whitney studied petroleum engineering as an undergraduate at the University of Oklahoma, and upon graduation, she accepted Canvas Energy’s offer to become a project engineer. She was at Canvas for more than seven years when she recently took an opportunity to work for Koura Global, a fluorspar mining company. Her decision to get an MBA stemmed from the unexpected downtime she had during COVID and a desire to get the qualifications to become a decision-maker.

Whitney put her project engineering skills to use, studying three months for the GMAT then creating a spreadsheet of her top 20 schools with variables including salary, costs, etc. After she narrowed her list down to three, she chose Duke because she liked what she heard from other people who had completed Duke’s EMBA program.

“Duke has exceeded my expectations,” Whitney says. In addition to “lifelong friends and top-notch professors,” she believes the Duke EMBA will increase her value in her job. Adding finance, strategy, and business knowledge – “things I rarely used as an engineer but now have in my toolbox” – Whitney says, “Without this new knowledge, I don’t know if I would be the right fit for my role at Koura.”

As Whitney reflects on her career journey so far, she credits the Choctaw Nation for helping prepare her for success. “They are big on supporting members in any way they can,” she says. When she encourages others to “be passionate in everything you try, always give it 100%, and don’t ever stop chasing your dreams,” she could be channeling her ancestors. She also wants to pass down her Choctaw traditions to her children. “Bringing my kids up to be aware of their heritage and be part of this incredible tribe matters to me – it is part of who they are.” 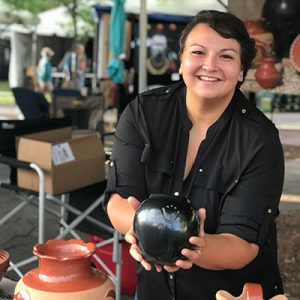 Jamelyn Ebelacker has taken a circuitous route to her current position as a full-time MBA student at Arizona State University’s W. P. Carey School of Business. After a childhood toggling between Eagle River, Alaska, and Santa Clara Pueblo in northern New Mexico, Jamelyn chose to study New Media Arts at the Institute of American Indian Arts in Santa Fe.

Coming from generations of Pueblo potters who make traditional “red and black” pottery, she chose a more modern path – a decision encouraged by her elders. “They wanted me to broaden my horizons as much as possible and learn new things to be able to survive in a non-Indigenous world,” Jamelyn explains.

They wanted me to broaden my horizons as much as possible and learn new things to be able to survive in a non-Indigenous world.

After college, Jamelyn joined the Peace Corps. “I also come from a long line of warriors and military service people,” she says. “When it came time to decide how I would serve, I chose to serve in the Peace Corps, and was stationed in the Eastern Caribbean.” Jamelyn initially worked as a primary school English teacher on the islands of Dominica and Saint Lucia, and she chose to extend her service to work with nearly 100 volunteers across four islands to implement projects that addressed the specific challenges of those Caribbean communities. “This was a pivotal moment where I developed a passion for project management and producing,” Jamelyn explains.

When the pandemic curtailed her Peace Corps stint in 2020, she found herself back home, with a deflated sense of purpose. She soon put her production experience and arts background to use and began working as a creative producer for BIPOC (Black, Indigenous, People of Color) organizations to address social and racial justice challenges in communities across the United States. The work, Jamelyn says, “filled her cup and revitalized that sense of purpose,” but she lacked the skills to make the full impact she desired. “I didn’t have the complete set of skills necessary to help these organizations make strategic business moves or market themselves effectively. I recognized that I had a great deal more to learn about marketing, entrepreneurship, consulting, and finance, which I only had surface level knowledge of,” she explains.

To gain more business acumen, Jamelyn enrolled in Arizona State University’s W. P. Carey School of Business, where she is currently in her first year, concentrating in Consulting, with a minor in Entrepreneurship. “I am excited to translate this wealth of knowledge into a continued career helping organizations develop meaningful projects and initiatives, and build community,” she explains.

As she gains the skills to serve her ultimate goal, she carries on the traditions of her Pueblo heritage. “Every interaction is an opportunity for education,” she says. “While I am constantly learning from my elders and those around me, I also have a responsibility to educate and represent my people, and to carry on the traditions and knowledge that my ancestors fought for.” Maintaining her connection to her Indigenous community, as she navigates her MBA journey, is crucial. “In the business world, it is easy to lose sight of what is truly important. To be able to draw on my cultural teachings and values as I move through this MBA program is so powerful for me, and I am grateful to be an Indigenous woman in business.” 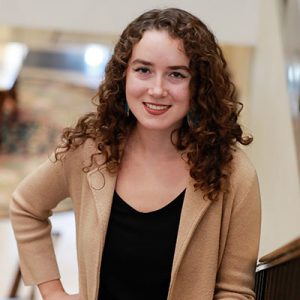 Another member of the Choctaw Nation, Ashton Megli grew up in the Dallas-Fort Worth area but visited family in Oklahoma often and attended pow wows and cultural events there. When it was time to consider colleges, Ashton participated in the Choctaw Nation’s pre-college Visit Program and toured Yale University. “Yale had a Native American Cultural Center, and it was important to me to have a Native community,” Ashton explains.

After graduating with a psychology degree, Ashton worked as a research associate for a behavioral economics study at Yale. She developed a passion for mental health and gained clinical expertise, which then led her to get a Master of Social Work (MSW) degree at Washington University in St. Louis. In the first year of her MSW, she focused on Native American and Alaskan communities, as well as public policy courses. Her decision to get a dual degree at the Olin School of Business stemmed from a desire to increase her financial and management background. “I wanted to expand my education and gain more quantitative skills,” she explains, hoping to change “how the public and private sectors can partner to advance equity.”

When she completed her dual Masters degree, Ashton took a role at Deloitte in Government Public Sector consulting, where she works in the federal health sector. Consulting appealed to Ashton because of the diversity of experiences it offers. She is also involved in Deloitte’s Native American inclusion group, which gives her the opportunity to stay connected to her heritage and participate in recruiting events and other activities.

Through all her experiences, Ashton has carried the wisdom of her tribe with her. As she says, the Choctaw Nation “was instrumental to me in launching the academic part of my life because they place value on education.” Ashton also emphasizes setting boundaries and taking care of oneself to “contribute your best self in your work.”

The Choctaw Nation was instrumental to me in launching the academic part of my life because they place value on education.

With a heritage she says she feels “blessed to be part of,” Ashton strives to emulate the Choctaw principle of being a good citizen, and she uses her privileges to have a positive social impact, be human-centered, and help more underrepresented people attain positions of influence. 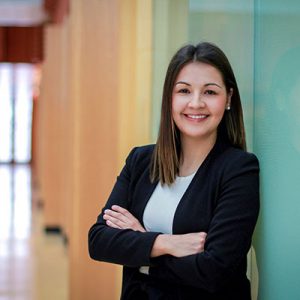 Kalina Newmark’s story reads like a novel. The daughter of a New Yorker father and a mother who is Shúhtagot’ı̨nę Dene and Métis, Kalina grew up between the Okanagan Valley in British Columbia and the remote community of Tuktoyaktuk (commonly known as Tuk) in the Northwest Territories, Canada.

After graduating from high school, Kalina attended Dartmouth College, in part, because of its original commitment to educate Native Americans. “What drew me to Dartmouth was the strong sense of community and service,” Kalina explains.

After graduating from Dartmouth with a double major in Native American and Indigenous Studies and Anthropology modified with Linguistics, Kalina landed a highly competitive spot as a Presidential Fellow. First, she worked for the president of Dartmouth, who was later named the president of the World Bank. In her second role, Kalina helped establish Dartmouth’s partnership with the Indian Health Service, an agency within the Department of Health and Human Services responsible for providing direct and medical health care to American Indians and Alaskan Natives.

Kalina always had an interest in business, but she did not know if she wanted to make it her career. It was not until she attended a summer program at Dartmouth’s Tuck School of Business and then spent three years at Cargill in Minneapolis, that she realized that her passion for people, language, and food could be her career. She studied at the University of Michigan’s Ross School of Business for her MBA, focusing on marketing and strategy.

Her role for the last three years – working as a Brand Manager on the Starbucks Coffee At-Home business – is an amalgamation of her interests and passions. Kalina says she applies to her role what has been passed down to her through her Native American heritage, such as being a person of integrity and respect for others. “It is important to me to be someone others want to work with. I work with a lot of team members across functions, and we have to respect each other because our final output is only as good as the team,” she says.

Especially from our elders, we have a lot to learn about life and from our history.

Additionally, Kalina values coming from a “culture of expert storytellers,” which is an essential aspect of her job as a brand manager. “Especially from our elders, we have a lot to learn about life and from our history” that needs to be passed down from generation to generation, she explains.

Forté acknowledges and honors all Native Americans and Indigenous peoples, their sacred traditions, and their remarkable contributions during Native American Heritage Month.