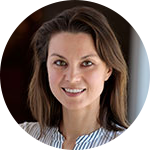 Many women find the idea of negotiating their salary intimidating, but Elena Zinchenko is an expert on the topic. She teaches classes in negotiation and leadership at the University of Chicago’s Booth School of Business, where she’s also the Director of Research Innovation. At the 2019 Forté MBA Women’s Leadership Conference in Chicago, she gave a talk entitled, “Damned if you do and doomed if don’t: Getting out of the double bind negotiating as a woman.”

Zinchenko reminded the audience that equal pay is an issue all the way up the corporate ladder, saying, “Women earn less for comparable work that they’re qualified to do than men, and the discrepancy is really dramatic in the upper echelons. Looking at U.S. firms, only 2.5% of the five highest-paid positions are held by women.”

Women can help change that by negotiating for higher salaries, but they aren’t always willing to do so. (In fact, only 12% of female MBA students negotiate their first job offer.) Zinchenko says women are much less likely to negotiate, because they worry about social and professional consequences. She says that’s not self-sabotage—those are legitimate fears.

She described a study in which male and female actors interviewed for jobs. The employers were asked about their willingness to work with each potential employee. Both male and female employers were more willing to work with the women who did not negotiate. If someone subconsciously believes women should be accommodating and nurturing, they may feel uncomfortable when women ask for more. That implicit bias holds women back.

So should women just take the first salary they’re offered? No, that’s not the answer either.

Zinchenko explained that when women don’t engage in salary negotiations, they’re not just short-changing themselves once. Every position has a salary range, and the willingness to negotiate and bump that up even a little bit has long-term effects on a woman’s pay. Raises are often percentage-based, so the lack of initial negotiation results in smaller increases over time. A few thousand dollars less pay early on in a woman’s career can mean she makes hundreds of thousands of dollars less over her lifetime.

Zinchenko had good news, too. She says women are more comfortable when they’re negotiating as an agent, or on someone else’s behalf. She recommended looking for ways to do that, even if they may not always be obvious. As an example, she described Sheryl Sandberg negotiating for the position of COO at Facebook. As Sandberg negotiated aggressively, she told the interviewers that she was showing them what they would be getting from her as a negotiator once she was part of the company. That framed her negotiation skills as an asset.

Some of the big negotiations we make in life are distributive negotiations—win/lose negotiations like buying a car or a house. Once they’re over, the parties go their separate ways. Integrative negotiations are more complex, because they’re made within the context of long-term relationships, such as in the workplace or in your personal life, and there are multiple issues at stake.

Zinchenko says, “Multiple people have varying preferences over those issues, which is great news, because you can figure out how to complement those different preferences over multiple issues.” In integrative negotiations, the goal is to find a solution that addresses each person’s interests.

When you enter into a negotiation, Zinchenko advises making a high initial offer that’s “aggressive, but not offensive.”

To avoid offending, make sure you have done the research and are able to justify that high number. That way, you’re making it clear that you’re going to justify your offers, and that you expect the people on the other side of the table to do the same. If they want to offer you a lower number, they will have to justify it.

If they can’t offer you a high salary, there may be open to other tradeoffs such as more vacation time, telecommuting on Fridays, or tuition reimbursement. It’s important to show that you’re flexible and want to collaborate, but that you’re committed to getting what you want.

She advises, “Think about negotiations as this very creative problem-solving process rather than an adversarial situation.”

At the Booth School of Business, Zinchenko challenges her students to use their negotiating skills to get the value they paid for the course back within two years. Even if you haven’t taken her course, why not challenge yourself to negotiate? Bring a few of her tips to the table. You might just improve those statistics she quotes—and your own bottom line.