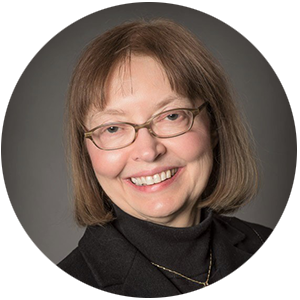 Marie Winters has always relished a good puzzle. But when this Midwestern go-getter graduated from Knox College with a B.A. in Mathematics, she had no idea that her penchant for problem solving would lead to a robust career in the financial industry, or that she’d one day become a sought-after CFA® charterholder.

Winters graduated from college into a recession, and work was hard to find. So when she was offered a computer programming job at a small commercial bank, she figured she’d work there for two years, and then make her next move. But banking piqued her interest. “I was fascinated,” she recalled, “and I found myself starting to learn as much as I could.” She quickly graduated to managing the bank’s back office and went on to become the youngest officer in the organization’s history, then its controller.

Upon graduating from college, a recession limited Marie’s career options. When she took a computer programming job for a small bank, she realized she loved banking.

MBA: Filling the gaps with an important credential

Having never taken an accounting class, Marie recognized that an MBA would help her move ahead in her banking career.

While at First Chicago Corporation, Marie evaluated loans for clients in Asia, Africa, Europe and South America, allowing her to see firsthand how business was conducted differently all over the world.

“And then it was like, ‘oh my goodness,’ Winters laughs. “I really need to learn more.” Winters had been teaching herself accounting on the job, but she’d never taken a formal class. She decided to pursue her MBA at Washington University in St. Louis to take her career to the next level.

After receiving her MBA, Winters got a job at First Chicago Corporation, now part of JP Morgan Chase. She completed the bank’s credit training program and found herself crafting commercial loans for utility companies – and having fun while doing it. “I loved doing the deals, structuring and negotiating them, I loved doing the underwriting for the credit,” Winters recalls.

Her colleagues took notice. One day, a senior officer from the bank stopped by her desk and asked if she might be interested in joining a high-powered group that evaluated individual loans and loan portfolios for commercial real estate developers, energy companies, and financial institutions, and other types of companies all over the world. Winters jumped at the chance.

Working in that group, Winters said, “really allowed me to see how business was conducted in different parts of the world, how it was influenced by culture.” She traveled widely: to Brazil, Argentina, the UK, Spain, Germany, Nigeria, Hong Kong, Japan, and Australia. Globe hopping and assessing deals was exciting – but after a while, spending three out of four weeks on the road took a toll. Dating was next to impossible, and Winters was ready to find a partner, settle down, and have a family.

But settling down did not mean settling for just any job. “I realized that I was really good at evaluating companies quickly,” Winters said. “How can I put this all together? Could I build a bridge to get into the investment management business, but also have some time where I could really be in Chicago?”

In the end, Winters stayed at First Chicago Corporation for several more years: she moved to a new group and managed a team of employees (all MBAs!) who did the credit underwriting for a $3.7 billion loan portfolio, and then went on to a proprietary trading desk that invested in distressed and bankrupt companies.

As Winters settled back into Chicago, she started dating. She approached it the same way she approached business: methodically.

“I was on a mission,” she recalls, “and I would tell my friends I wanted to meet Mister Right.”  After a couple years – and many blind dates later – she found him. They married and adopted two children from Asia.

In those early years, Winters and her husband took parenting shifts: she’d go to work early, while her kids were still asleep; her husband would get them up and off to school. Winters would make sure to be home in the evening. “I don’t think you can have a perfect balance,” Winters reflected. “There would be times that were my family time, when I would devote myself to that. When I was in the office at work, that was my number one commitment.”

Winters counts herself as lucky: they were able to hire a nanny, and her work gave her the flexibility to attend her kids’ sporting events and holiday plays. Working and parenting, Winters said, “is a deeply personal thing for women. And I don’t think there’s one right formula. You have to figure out your own way to integrate it, and it can be done.”

As Winter’s career advanced, as she got deeper into investment management, she decided to become a Chartered Financial Analyst (CFA). “It was like, okay, I’m really captivated by this,” Winters said, “and this is where I want to be for my career. And I knew that credential would demonstrate to people, as my MBA had earlier on, that I was really committed, I was really serious, and I was willing to invest the time and money in myself to further develop my skills professionally.”

These days, Winters is senior vice president and team leader for Fixed Income Research at Northern Trust Asset Management. She manages a small team, but most of her work is spent evaluating companies: “I figure out what makes them tick, what their prospects are. And I look at where I can I create a valuation in the company that makes sense – where we can make money that is consistent with the needs of our investors.” Northern Trust, she explained, has a variety of different clients – “high net worth individuals, pension funds, corporations” – all of which have different needs from their investments.

In her spare time, Winters chairs CFA Society Chicago. Joining a professional organization, she says, can be valuable to women at all career stages. “Join an organization where you really like the mission, where it aligns with who you are personally and professionally,” Winters advised. “It can be a wonderful way to expand your network and develop your leadership skills.”

And Winters has one other piece of advice to share: don’t just wait for opportunities or mentors to come along – create them. “You can be strategic. You can prepare,” she counsels. “Don’t just talk to anybody – talk to people who you want to know better. If there’s a sense that relationship can take off, then take advantage of it.” You never know what will happen if you just speak up.