Learning how powerful, strong, and kind women in senior leadership positions exercise their management styles with poise, vision, and stewardship is a great personal resource in rating and reforming my individual leadership style.

These women seem to effortlessly take the stage as if they were born with all the keys to success; namely good judgment, a planned trajectory of their career, and supporting relationships with peers and colleagues. 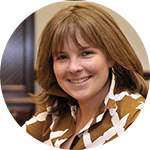 Alyssa Mastromonaco, Former Deputy Chief of Staff (just stepped down in April) to President Obama is one of the most powerful women in Washington, DC. In November 2011, she was included on The New Republic‘s list of Washington’s most powerful, least famous people that you have probably never heard of.

This female leader was responsible for deciding who the President meets with, talks to, and appoints to office. She weighed in on strategy and ran the campus of the White House. Even without her full-time job, Mastromonaco has pledged to even plan the President’s post-office transition. As astounding as this description sounds, it is rather a simplistic overview of her job. Despite her purposeful low profile, Mastromonaco traveled all over the country and the world; often not more than several feet from the President as he made momentous decisions.

Mastromonaco emphasized a teamwork approach to her position. She let outward facing roles have their exposure while keeping a low profile herself. Her lack of fanfare and humble, practical approach allowed her to focus and accomplish a great deal more. The mystery of her actual role warded off potential soliciting or poor conceived notions.

Another key attribute of her leadership is that she emphasizes respect and kindness:

“I think you can be tough, powerful, and still be kind.”

Personally, I find great inspiration in the fact that Mastromonaco fostered a kind, respectful workplace environment under her leadership. 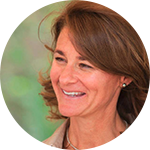 On the humanitarian stage, a powerhouse female who places a premium on cultivating respectful relationships in her management style is Melinda Gates. Melinda Gates is a businesswoman, philanthropist, and co-chair of the Bill & Melinda Gates Foundation which aims to help all people lead healthy, productive lives. While the foundation is based in Seattle, Washington, Gates goes to developing countries where she tirelessly employs her expertise to give the less fortunate the chance to lift themselves out of hunger and extreme poverty.

In the United States she targets her efforts to those with the fewest resources to provide access to opportunities to succeed in school and life. The Gates Millennium Scholars program selects 1,000 talented high school students in the United States each year to receive a good-through-graduation scholarship to use at any college or university of their choice.

Despite the enormous monetary contributions, the true and lasting impact of Gates’ management style is priceless. As a visionary with her name on the door, Gates decides the direction of the organization and reviews the results.

The work of Melinda Gates has inspired other big donors and has radically changed the way funders think about effective philanthropy. With her background in technology and business she was able to run highly targeted campaigns coupled with data-driven monitoring and global collaboration.

In her commencement speech to Stanford graduates this past spring, Gates urged students to be open to painful encounters and to let them inspire and drive them to make things better for themselves and their communities here and abroad:

“We believe that it’s these difficult encounters with other people’s suffering — ones that really do break your heart — that channel the world’s immense talent and energy and capacity for innovation in the most important directions. And ultimately, that’s what makes us optimistic — the idea that humanity has not only the ability but also the desire to solve the hardest problems faced by the poorest people.”

Examining both powerful management styles and personalities side by side, it is evident that there is no universal recipe for effective leadership. Yet, the strong similarity and the cementing ingredient for their successful leadership has been the respect these women had for themselves and others.

Coming from hardworking families, these women built themselves up through hard work and determination. They utilized management as a conduit for change in their workplace and communities through poise and hard work.

I am truly thankful for their example and I hope you find inspiration in their life’s work for our country and the world so that you and I, as the emerging generation of change-makers, may contribute as well.