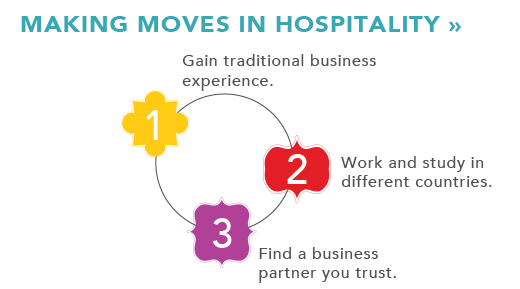 Lee Gonzalez and her sister run a hostel, bar, and cafe in Queens called The Local NY, which has grown to 15,000 square feet, 150 beds, 20 professionals, and $2.5 million in annual revenue—in just two years. They launched it after owning and selling two hostels in Barcelona, Spain, and they recently also started their own management company, L&L Hospitality, with plans to open a hostel property in Portland, OR in 2018. Lee’s international experience, business education, and start on Wall Street have shaped her success in hospitality and as a serial entrepreneur.

What do you love the most about your job?

The people. All of my clients are predisposed to have a great time and hostels attract a more international crowd.

What attracted you to hospitality?

As a student, I frequently traveled and stayed in hostels. I thought I could run them better. I was a little naïve and cocky.

My senior year at Wharton, I wrote a business plan to own a chain of hostels. After I finished my degree and got a proper job on Wall Street, the business plan stayed with me.

Where did you start your career?

Before my senior year, I interned at Goldman Sachs in New York City. After graduating, I started a full-time position in its Private Wealth Management group and completed all three years of the analyst program. I think of it as the “legitimate phase” of my career—it felt like the right thing to do after studying finance. I learned so many things working in financial services, and wanted to build on that while pursuing my dream of owning hostels.

What were other critical stops in your professional path?

After my start in finance, I moved to Barcelona, Spain, where I opened two hostels with my sister, Lauren Gonzalez. Then I paused to earn an MBA at INSEAD.

What inspired you to pursue your MBA?

It was exciting to go back to a curriculum I was familiar with from undergrad, yet it had a whole new application and made much more sense after gaining concrete business experience. There were many reasons I studied at INSEAD. I was 30 years old when I entered my program, and the average age of INSEAD students is older than some American programs. I was based in Europe at the time and my work world was global. With INSEAD, I could study at both the French and Singaporean campuses. I was also attracted to INSEAD’s 10-month program given where I was in my life.

Looking back, I knew I wanted to study business when I was a teenager. Our family discussed business concepts constantly. My dad ran companies and has an MBA from the University of Chicago. My mom was the principal of a huge public high school and has a master’s degree. My sister earned her MBA from Wharton.

What’s it like running a company with your sister?

We’re almost of one mind. I trust her completely.

We’re less than a year apart in age and we’ve always been close. She started in finance too, working in a two-year rotational leadership program at HSBC.

What have been some keys to your success?

The biggest factor is the right attitude. Things will get done. I’ll make them work. I’ll find a way. Failure is not an option.

If you had to pick a career “wow moment,” what would it be?

I remember walking around our first hostel after the guests had left and thinking, “We did it. This is ours.”

Also, when we moved back to New York, we were invited to represent hostel operators at Mayor Bloomberg’s “State of the City” address as he introduced legislation to make hostels more prevalent. It was nice to come home and have that recognition.

How do you keep your personal life as full as your work life?

I’m lucky that I spent most of my twenties in Europe. The concept of work-life balance doesn’t exist—it just is. You learn to prioritize meals instead of eating at your desk.

I also have friends who aren’t in my industry and have very different interests. It makes life more interesting.

How do you stay involved in your community?

I’m very involved in my Wharton and INSEAD alumni associations. I often speak on panels and to prospective students. I’m very candid, and I think applicants like to hear from someone who tells it like it is. They also make my network richer.