In her feminist anthem – recorded in 1967 – the late Aretha Franklin belted out, “All I’m askin’ for is a little respect.” Joanne Lipman’s keynote speech at Forté’s 2018 MBA Women’s Leadership Conference in June revealed that women are still wrestling with the same challenge more than 50 years later. 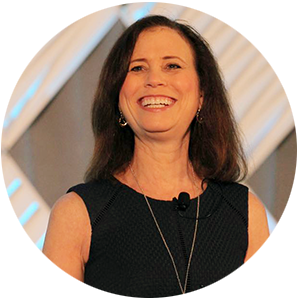 Lipman, the author of That’s What She Said: What Men Need to Know (and Women Need to Tell Them) is a veteran journalist who began her career at the Wall Street Journal and rose to become its deputy managing editor – the first female to hold that position.

Despite progress in feminism over the years, Lipman shared stunning statistics, such as:

But Lipman also said, “Every piece of research will tell you that when you add women to organizations or work groups, they make that organization more successful. Full stop. Period.”

So why – if women add so much value to an organization – do pay gaps and other work-related discrepancies still exist between the sexes?

The Roots of Gender Inequality

Biases lurking under the surface

Lipman believes that gender inequality is primarily a result of unconscious bias, which she describes as biases we all have that are “buried so deep inside that we don’t even realize they exist.” Even though the biases may seem small, they have a “huge, outsized impact,” she says.

Unconscious biases begin early. For example, young mothers often overestimate the crawling skills of their sons and underestimate their daughters. In school, many teachers have a bias that boys are better at math. At the university level, Lipman says studies have shown that a female college student needs to have an A average to be seen as equal to a male student with a B average.

It’s no wonder that biases that form when girls are very young lead to massive gender career gaps over time. As Lipman says, it’s no surprise that by the time women start their careers, they have “internalized that boys are better than girls.”

When it comes to gender wage gaps – the fact that women earn 80 percent as much as men in the same role – Lipman said many women don’t always negotiate well for raises and promotions because they don’t know what they are worth. Perhaps more significant than the wage gap is what Lipman calls the Respect Gap: “When women are paid less, our contributions are valued less.” The Respect Gap means that men have more power, more respect and more influence than a woman with the same title.

Girls are often taught to be collaborative and cooperative when playing whereas boys tend to play in games where there is a clear winner and loser. The habits women develop early, says Lipman, leads to women who over-apologize and use “hedging language” – such as “I’m sorry to bother you, but …” and inflections at the end of sentences that sound like questions instead of statements.

According to Lipman, when giving candid feedback to women, men are afraid that women will become emotional. When this happens, women cannot advance because they are not aware of their true development areas, Lipman explains.

Understanding the problem is one thing, but what are the solutions? First, Lipman emphasizes that men’s involvement is essential to make a change. She says that while women talking to each other is valuable, without men “it’s only half a conversation.” Bringing men into the fold is where the real magic happens.

Lipman’s book has a “Cheat Sheet: Tips and Take-Aways for Men and Women,” which offers ideas that can help organizations tip the scales to be more gender balanced. Among her suggestions:

Whether you are a woman who feels at a disadvantage in the workplace or a male who wants to create more gender equality within his organization, consider Joanne Lipman’s suggestions. Everyone benefits from giving women more r-e-s-p-e-c-t.