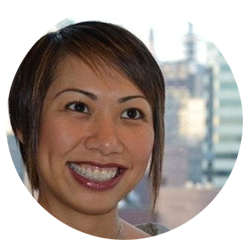 “This is a little embarrassing, but as a young child, I wanted to be a ninja or a kung fu fighter,” says Alice Kwan, Principal at Deloitte Consulting and U.S leader for the firm’s client talent services. “I never wanted to be a ballerina or anything like that. Watching martial arts movies with my brother and father must have influenced me. More than anything, I think it was the idea of being fierce and not having to be saved that was really the thing that interested me.”

In high school, she became taken with journalism, and later, during college, found herself drawn to a career in physical therapy, though she decided it was too late to deviate from her plans to go into business. “I definitely fell into consulting,” she admits. “I love it now, but never would have imagined it as a profession when I was younger because I didn’t even know it existed. Growing up in an immigrant family, the mantra was always to go into business, so I studied Finance in college even though I hated it. But I think that having a business degree helps me in the way I think about issues and serving my clients.”

After college, she started at Andersen Consulting, working on process improvement and systems consulting. Joining Deloitte wasn’t something that she foresaw – in keeping with the improvisational nature of her career, she fell into it when a professional acquaintance got in touch to offer her for a role leading campus recruiting for the tri-state area for the audit, tax and related services functions. “I had no background in HR whatsoever, but this person took a chance on me. It was a great role that I had for about two-and-a-half years. It was a lot of fun and very rewarding to bring in all that new talent into the firm. In fact, one of the very first interns I hired is going to be admitted to the partnership this fall. I feel like in some small way, I had something to do with his success and I am thrilled to welcome him into the partnership.”

After serving in the HR role, Alice stepped back into client-focused work, in the human capital practice. Working her way up, she was admitted for partnership about five years later. Alice gives credit to the various mentors she’s had along the way. She also attributes her career success to having a firm idea of what motivates her. “Spend time to really understand what you are passionate about and what you are good at and focus your energies on that. Don’t try to waste all this time and energy trying to “fix” your development issues unless they are fatal. Also don’t let achievement be your sole driver at the expense of what you are really passionate about. That certainly is one of the things that I have to battle all the time. I think that is true of many people who come from an immigrant background.”

Alice turns an objective eye on herself, and seeks out ways to improve, both personally and professionally. “I try to treat every new experience like a learning experience. I think a lot of times people are reluctant to take on things if they don’t seem glamorous or fit exactly what they are looking for. I really try to treat everything I take on as a new challenge and something that I can learn something from. I am by nature, very much of a taskmaster and very achievement oriented. I have to remind myself to say thank you more often.” She also makes sure to “pay it forward,” as she says, devoting time to mentoring and coaching others.

“When I advise young people about their careers, I tell them that they should really understand the culture of the organization. Is it a learning organization? Is it one that takes risks? Allows you to fail? Moves talent around to different roles? By asking some questions up front, you can understand if the organization values the same things you do.”

Having served as a consultant to numerous top companies, Alice sees a few common threads. First and foremost, she says, successful companies have aligned their talent strategy with their business strategy, and put resources into refreshing that talent strategy so that it stays relevant, focusing on key positions that are critical to business performance. She has also observed that successful companies today understand the need to provide for continual cultivation and education for their employees. “Given the shortage of skilled talent and complexities of organizations, more than ever companies are finding that they can’t just hire away their issues, but actually need to develop them.” She advises that anyone just starting out in their careers look for an organizational culture that focuses on talent and employee development.

Reflecting on her career success and the fit she’s found at Deloitte, Alice says that most of all, she enjoys the freedom that consulting offers. “It’s not like a job where I have to show up to the same place every day and have set times with a set schedule. I can take off to take care of personal things if I plan around them whenever I need to. I also find that if I need to work remotely, I can. I also try to not work at all from Friday nights through Sunday mid day. I completely unplug and spend time with my family and friends.” After fourteen years with Deloitte, her enthusiasm for the firm and her role in it is still palpable. “As a principal, I have also taken on many different roles. The excitng thing about Deloitte is that you can do so many different things in the course of your career. It’s like having multiple jobs in one place.”