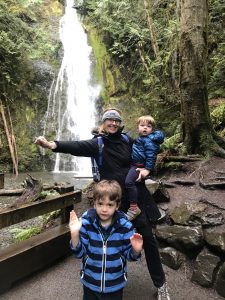 When Chantel Adams and Jacqui Cuffe McNamara got MBAs in 2014, jobs were not the only thing on their minds. They had also just capped off two years of dedication to advancing women’s representation in business, for which they tied to win the prestigious Edie Hunt Inspiration Award. Seven years later, they still believe in Forté’s mission to get more women leading.

Receiving the Edie Hunt Award did not signal the end of a journey to help women for either Chantel or Jacqui.

Chantel, who currently works at Align Technology, Inc. – the makers of Invisalign® aligners – as a senior manager on the consumer marketing team, has felt a strong responsibility to pave the way for other women since attending an all-women’s college as an undergrad. “Having women leaders to look up to gives me the confidence to move ahead, and I want to be that person for others,” she explains. Chantel is not just paying lip service. Since winning the award, she has stayed involved as a frequent Forté event speaker and coach. “Helping women apply and get into business school will forever be a priority for me, at least until we are at 50% enrollment.”

When Jacqui – who has worked at Microsoft for many years, and currently leads US Marketing and Operations for Power Platform – received the award, she recognized that helping others through their business school and career journeys was worthwhile. “Winning the award was a catalyst for creating an MBA program in my job at Microsoft,” she says. At Microsoft, Jacqui and a peer and built a program to help new MBA hires with training and onboarding. Over three years, they onboarded 40 MBAs and created a support network in which they help each other with coaching, mentoring, and finding jobs.

Develop relationships even with people you don’t feel you have as much in common with. (Jacqui Cuffe McNamara)

Whether through their continued involvement with Forté or in their workplaces, Chantel and Jacqui both have strong perspectives about advancing gender equity. “No matter what room you are in – whether it’s your first day or your 1000th – you are there for a reason. Don’t be afraid to bring your unique perspective,” suggests Chantel. To MBA students, she recommends pursuing their passions because “people will remember you [for it]…and that is what you will excel in,” she says.

Jacqui believes that a hearty network is essential to help colleagues grow and make career decisions – and has been particularly helpful during the pandemic. “Many were hit hard and quickly, and the people in my Kelley (Indiana University) network have been leaning on each other heavily,” she says. Jacqui also recommends developing relationships “even with people you don’t think you have as much in common with. There was someone at Kelley I didn’t feel particularly aligned to, and now that is the first person I go to for career advice,” she explains.

Success now and beyond

Jacqui and Chantel have both excelled in their chosen careers, bolstered by the confidence and knowledge they gained through associations with Forté and its mission. Jacqui is most proud of how her innovation to develop best practices have been shared across multiple countries – one of her trainings was used more than 50,000 times. Additionally, “getting more Kelley grads to Microsoft and see them succeed has been rewarding,” she says. It’s no surprise that, as she looks ahead to becoming a sales leader one day, Jacqui’s ambitions also include “continuing to coach others that will lead to their passions.”

Chantel’s career perspectives have been greatly impacted by both the Great Recession of 2008 and the pandemic of 2020. Instead of pursuing a career in finance, Chantel pivoted to brand management partly to survive in the event of future economic disasters. “At Align, I’ve been able to use [my brand and strategy] skills as many other businesses have had to figure out how to survive,” she explains, and she has driven her company to success, despite the pandemic. Chantel aspires to be a CMO down the road, and her future will very likely include a continuing commitment to get other women leading, too.

No matter what room you are in – whether it’s your first day or your 1000th – you are there for a reason. (Chantel Adams)