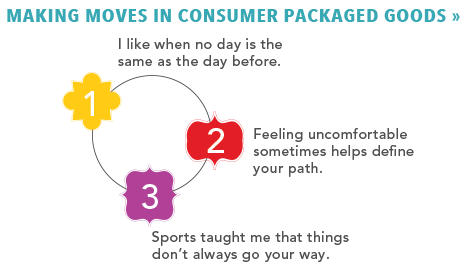 Brenna Fleener’s successful business career has been shaped both by her years as an athlete and her time spent living abroad. After graduating from the University of California at Berkeley, she moved to Rome and worked for a travel company. On a weekend trip to Paris, she recognized an opportunity and opened a branch of the travel company there. As an English major, Brenna had no formal business training, but she followed her instincts and later decided to pursue an MBA at Georgetown University’s McDonough School of Business to learn the fundamentals. Through her international experience, her MBA and what she learned as a collegiate athlete – to accept that things won’t always go your way – she has been able to thrive in a global brand management career that has spanned Procter & Gamble (P&G), Starbucks and now Clif Bar & Company.

As an English major, I had never taken a business class.

At the University of California at Berkeley, I was on the water polo team and decided to take an extra year to study abroad in Bologna, Italy. I loved being abroad so much that I then moved to Rome to work for a small, walking tour company called Context Travel. I started off doing some communications and marketing. A couple of years into that job, I went to Paris for a weekend. While there, I asked myself why we weren’t doing walking tours in Paris so I went back to Rome, pitched the idea to the owners, and they agreed to send me to France to open a Parisian branch.

When I moved to Paris, I didn’t speak French and learned everything on the job. After a couple of years there, I had built the Paris office from a thought into a revenue-driving branch of Context Travel with itineraries, customers, and a roster of guides. It was a transformative career experience because it was my idea, they sent me there alone, and it was an entrepreneurial adventure. Once that business was successful, I realized I liked running a business but had no real training. As an English major, I had never taken a business class so that made me think about an MBA to get some structure.

A few years at P&G was almost like a second MBA.

I went back to the US and specifically chose Georgetown because of its international and general management focus. One of the things I loved most during my Paris experience was having a holistic overview of an entire business. Traditional brand management seemed to offer that same general management experience, which led me to P&G. A few years at P&G was almost like a second MBA.

Eventually I started thinking about moving back west, and I knew from Paris that I liked a smaller, entrepreneurial environment with an international focus. I moved to Seattle to work at Starbucks in their China/Asia Pacific beverage category as a brand manager. My role was to launch a new technology that made specialty carbonated drinks.

From there, I came back to California and started with Clif Bar, where I’m now a brand manager for their international business. We are a tiny team – essentially a start-up within Clif Bar –  that is responsible for growing the brand in 20 countries outside of North America.

There is no roadmap in place, and there is a lot of testing, learning and making best guesses.

What I like about my current role is the entrepreneurial feel. International sales are a relatively small portion of the total business, but there is high growth potential. I like creating something new, and no day is the same as the day before. There is no roadmap or process in place, so we do a lot of testing and learning and making best guesses. If it doesn’t work, we iterate and do it again, which is exciting.

P&G is so disciplined, with processes in place for almost every issue and every challenge. It was incredible training for me because it gave me so many frameworks for how to think about problem solving. I like having that training to rely on, but now there’s room to go outside those frameworks to try other things.

Growing up, I was interested in writing and journalism. The MBA unlocked a new skillset I had not explored.

I had never worked in an office, had no scholastic business background and no corporate experience. The MBA gave me the fundamentals. In building the Paris business at Context Travel, I worked a lot from my gut, and I was lucky that it worked. The MBA gave me structure and helped me validate my instincts. I was much more prepared to go into a corporate role after getting the MBA.

Growing up, I was interested in writing and journalism and so naturally pursued liberal arts instead of math and sciences. Business can be so analytical and data driven, and my MBA and subsequent business experience taught me that I could not only excel with data and analysis, but that I liked it. The MBA unlocked a whole new skillset I had not explored or pursued.

Be open to different experiences and ask for what you want.

There is value in being open to different experiences. I interned at Chevron during business school because I was interested in their global reach, but without knowing if the oil and gas industry would be a fit. I learned a lot there, and it taught me that it is okay to feel uncomfortable with some choices because it helps define your path.

Another valuable lesson is that it never hurts to ask for what you want. I never thought the Paris business would actually work, but it did. Had I never suggested it, it wouldn’t have happened.

Sports have shaped me. You learn you are not always going to win, and you get okay with that.

Outside of my parents, sports have shaped me the most. I started water polo in eighth grade. There wasn’t a girls’ team until I was a senior in high school so I played as the only girl on the boys’ team. The early years were hard work and a slog at times. The highs of being with your teammates and having a beautiful game – those moments of glory offset the struggles. With sports, you learn you are not always going to win, and you get okay with that. Even when you do everything right and you are in the best physical condition, it doesn’t always go your way.

With no college education, my grandmother worked her way up to a high career level, and she did it by treating people well.

I really admire my grandmother. She grew up in Olney, Texas, and she ended up working at the local bank. She had no college education but retired as Vice President of Savings. When she passed away, the thing people remembered about her most was how kind and receptive she was to everyone. She was able to reach a high career level with no real training, and she did it through hard work and her interactions with people and treating them well.

While Brenna is certainly a role model for young women pursuing their business dreams, her own role model taught her that relationships are what matter most in business.