“My job is to make these two ladies tell you everything they know and how you can succeed.”

At this year’s conference in Chicago, Dr. Wallace conducted an hour-long interview with Carla Harris, vice chairman at Morgan Stanley, and Dana McNabb, president of US Cereal and Snacks at General Mills (and she was recently promoted to Group President, Europe & Australia segment, effective January 1, 2020). Topics ranged from confidence and risk-taking to advocacy and bringing your whole self to work.

Summarized below are their biggest lessons, or what Carla called her “hard-earned and hard-learned pearls after being a woman on Wall Street for 32 years”– as she clutched the pearls around her neck for effect.

Although she bought into the “meritocratic story” early in her career, Carla had an a-ha moment after being part of a performance evaluation roundtable. Witnessing that the people who were promoted had advocates familiar with their work, she realized “that somebody had to be willing to spend their currency on me behind closed doors.”

To get a sponsor, Carla recommends studying your organization and asking yourself, “Who has a seat around the decision-making table who also has exposure to my work?”  She suggests building relationships with sponsors the same way you do in your personal life – have consistent touchpoints and find ways to intersect.

Dana agrees with Carla that networking is essential. When she hears people say they don’t like networking, she responds: “If you don’t recognize that in every organization there is politics, there is a system, and a game you have to play, you are going to lose.”  Dana also recommends finding sponsors from other departments. In her experience, often outside sponsors are the most effective and influential. 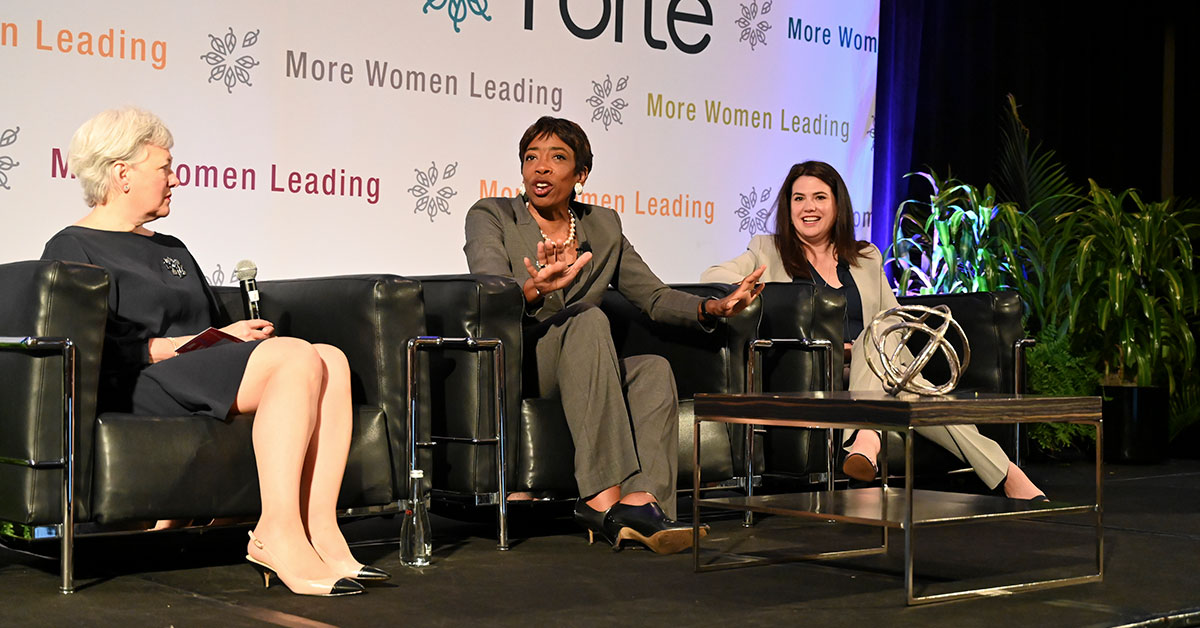 Dana shared that her biggest stepping stone started as a professional blunder. While working in marketing for General Mills, the native Canadian launched a television ad for Chex Cereal. Hours after launch, General Mills started receiving phone calls that the campaign was offensive to people with Tourette’s Syndrome. “Do you know how bad an ad has to be for Canadians to call in?” Dana joked. She immediately took ownership of the problem and came up with an effective solution, but it was a stressful moment for her.

Years later, when graduating from London Business School, Dana got a call from that same senior leader who had been impressed with how she handled the ad failure and asked her to join a global marketing team based in Switzerland. Even though she did not feel confident about taking such a big leap, the leader clearly believed in her and Dana says that job was pivotal to her future success. “You are going to make millions of mistakes. You have to make mistakes to get better. It’s how you handle them…that makes you a leader,” Dana explained.

Give yourself a break

Carla said that when she experiences moments of uncertainty, she reminds herself that she has successfully approached similar challenges before. She also had this resounding advice for young women who sometimes doubt their own abilities:

“If you think you can’t do something or should not be in the room…remind yourself that if you have been invited to the room, you belong in that room. And if you belong in that room you have a responsibility to speak. And if you have a responsibility to speak, then YOU MUST DO IT. And when you go into a room for the first time and someone invited you, please don’t sit on the wall (the seats behind the table in a board room). Go sit at the table.

And when you feel you are not up to a challenge…news flash: if someone is giving you a great opportunity, they are NOT setting you up to fail.  No one who is spending their currency to give you a senior position wants to see you fall. Your audience is always pulling for you. If you don’t trust that you can do something, trust the person who made the decision to put you there. They think you can make rain. Make rain, ladies, make rain.”

And although Carla exudes confidence, she says she still gets tripped up by “two things that impede women’s success: fatigue and fear.” When she struggles with less secure moments, more times than not she is tired and recognizes the need for a break.

With a demanding job and as the mother of four-year-old twins, Dana understand all too well that exhaustion can dampen her confidence. She has found that connecting with others is a useful tool for re-centering herself, and sometimes she schedules time off when her children are at school so she can get time alone to recharge. 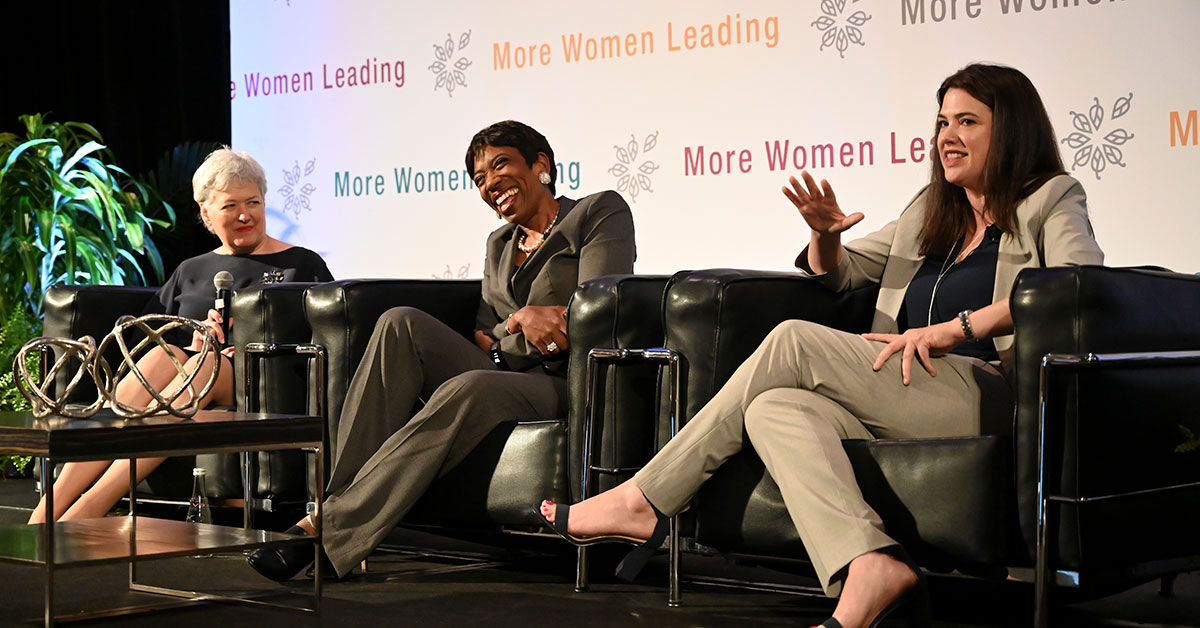 Raise your hand for risks

Early in her career, Carla wanted to be seen as willing to take risks so she raised her hand for projects in uncharted territory. She learned an important lesson in the process: “Whenever you are being asked to do something that has never been done before, by definition you are the expert.” That means defining what success looks like, exercising your voice, and setting the agenda and goals. In other words, she said, you have to “control the entire experience in order to be successful.”

Carla also urged the audience to create their own opportunities. “We need to raise our hands more,” she said. “Your voice is at the heart of your power and you …must ask for what you want and if there is something you would like to do, do not wait for someone to ask you.”

Having moved to the U.S. recently, Dana said pivotal career decisions like this must stand up to a checklist: what will I learn? does it fit with my values? how does it fit within my network? is it good for my family? “If it checks all those boxes, I tend to say yes. I have said yes more than I have said no…and for me that has meant moving around the world. I have lived in five countries in 10 years. Those experiences have been unbelievably grounding, added perspective and have changed my life,” she explained.

Carla said that she has a similar process, which keeps her from making emotional career decisions. She added that before committing to a decision, she shares the opportunity with someone who has her best interest at heart to make sure she is considering all angles.

Bring your authentic self to work

Carla said that when she was new to Wall Street, she had three strikes against her: she was Black, she was a woman, and she was young. But being multi-faceted was a major advantage because she was able to offer a unique perspective. As she explains, “If you are the only person who looks like you in the room, everybody is going to be paying attention…so all you have to do is deliver your excellence.” She encourages women to bring all the facets of who they are to their careers, saying, “Your authenticity is your edge.”

So, ladies, get out there and strut your stuff – regardless of your doubts, your background, and your challenges. As Carla might say, “News flash: We all have them,” even top businesswomen leaders like Carla Harris and Dana McNabb. It’s how you approach them that makes the difference.